- Can You Defeat the Nazis? 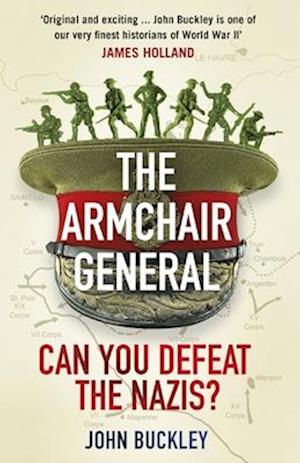 AVAILABLE FOR PRE-ORDER NOW - Re-write the course of WWII with this revolutionary new approach to history. Take the chair of Winston Churchill and other leaders. Make the decisions that will change the war - and the world.What might have happened if Poland was never invaded? Or if Hiroshima never happened? Or if the great evacutation at Dunkirk was scrapped? Would the war have turned out differently? Would Hitler have won? ARMCHAIR GENERAL airdrops you the reader into the key historical moments and turning points of WWII - from the outbreak of war to D-Day - and thrusts you into the role of decision-maker. Taking the chair of Winston Churchill, Field Marshal Montgomery, General Eisenhower and other leaders and soldiers from the Allied Forces, you will be primed with the contemporaneous intelligence that real leaders would have been presented with during the war - including maps and secret dossiers. Once you have examined the evidence, you the reader will then have to make key decisions that have the power to affect the war - and the fate of history. How far should you parachute behind enemy lines? Should you fight on or try to make peace? Will you send more troops in or hold them back? Do you wait or do you act? Each decision will take you to an alternate chapter in the book, and to either the truth, or to an alternate but highly plausible new reality.Written by John Buckley, professor of Military History and expert on strategy and war gaming, this book revisits the past in forensic and fascinating detail so that you can learn how every small action (or inaction) can create a whole different history. Will your decisions follow the same course as WWII? Or will you create a new future?