indgår i serie The Apprentice Witch 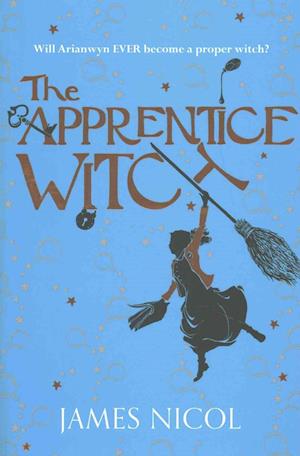 Studio Ghibli meets Diana Wynne Jones in the first spellbinding APPRENTICE WITCH book! 'Reminded me of the best of the Worst Witch books' ABI ELPHINSTONE 'A charming tale of magic, bravery and friendship, reminiscent of Diana Wynne Jones.' GUARDIAN 'The Apprentice Witch is entirely more charming, adventurous, and full of heart than a book has any right to be.' THE IRISH TIMES 'A delightful, witty and vivid story' KIRAN MILLWOOD HARGRAVE Arianwyn fluffs her witch's assessment. Awarded the dull bronze disc of an apprentice - to the glee of her arch-rival, Gimma - she's sent to protect the remote, dreary town of Lull. But her new life is far from boring. Turns out Gimma is the pompous mayor's favourite niece - and worse, she opens a magical rift in the nearby forest. As Arianwyn struggles with her spells, it's soon clear there's much more than her pride at stake ... A bewitching debut set in a world of domestic magic - a refreshingly small-world fantasy perfect for readers aged 9 and up. A spellbinding read, tapping into important themes of overcoming failure and building self-esteem. Filled with thrills, pesky magical conundrums, outlandish creatures and an enchanted forest, yet retains its warm soul and earthy charm!

Forfattere
Bibliotekernes beskrivelse Arianwyn fluffs her witch's assessment - instead of qualifying, she's declared an apprentice and sent to remote Lull in disgrace. Then her arch-enemy, mean girl Gimma, arrives on holiday determined to make her life a misery. But as a mysterious darkness begins to haunt her spells, Arianwyn realizes there's much more than her pride at stake ...