The Anatomy of Manual Dexterity 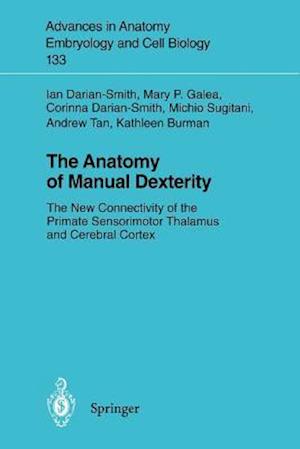 1. 1 Purpose and Plan of This Review This review is focused on the topography and connections of some of the neuron populations that determine the manual dexterity of the macaque monkey. The populations selected for examination are the following: 1. The corticospinal neuron populations 2. The thalamocortical and corticothalamic neuron populations associated with the sensorimotor cortex 3. The ipsilateral cortical connections of the sensorimotor cortex These neuron populations have been chosen because of their obvious rel evance to the directed, intelligent use of the hands, but also because of their anatomical and functional interdependence. Corticospinal neuron populations transmit a complex, orchestrated output from a number of different regions of cerebral cortex to the neuron populations in every segment of the spinal cord, and this output includes the command information defining the intended manual action. The thalamocortical complex is especially concerned with the transmis sion and modulation or filtering of (a) visual, tactile, proprioceptive, vestibular, and auditory information to the cerebral cortex and (b) information from the cerebellum, basal ganglia, limbic system, and brain stem which is relevant to sensorimotor behavior. Finally, the extensive ipsilateral cortical connections constitute a major part of the supraspinal circuitry which coordinates the contri butions of all the cortical neuron popUlations contributing to intelligent sen sorimotor behavior and, in particular, transmits the cross talk between those cortical neuron populations which shape and control the dextrous handling of objects within reach.