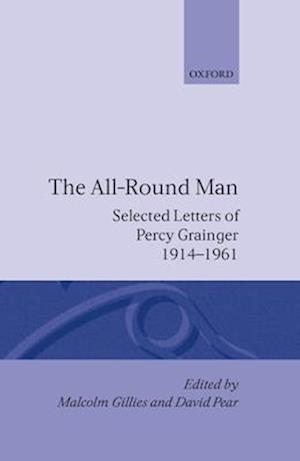 Percy Grainger was one of the most colourful of this century's cultural figures. As a pianist and largely self-taught composer he was feted in the 1910s and 1920s, and is probably still best known for the work he `dished up' in many different guises, Country Gardens. But Grainger aspired to the role of `the all-round man' and nourished ideas, some brilliant, others ludicrous, across the full range of human endeavour: race, nationality, sex, language,life-style, food, clothes, technology, ecology. The All-Round Man depicts that scrambling diversity through seventy-six uninhibited letters from Grainger's `American' years, 1914-61. These letters are fascinating to read: they are cultivated `rambles' (as Grainger actually called several of his compositions), not dissimilar to today's telephone conversations. Often written in Grainger's crunchy `Blue-eyed English', they explore uninhibitedly every corner of his public and private life. They reflect the magnificent attempts of agreat but flawed mind to encompass the world. From the letters: `Personally I do not feel like a modern person at all. I feel quite at home in South Sea Island music, in Maori legends, in the Icelandic Sagas, in the Anglo-Saxon `Battle of Brunnanburh', feel very close to Negroes in various countries, but hardly understand modern folk at all.' `Music seems almost to have a "surface", a smooth surface, a grained surface, a prickly surface to the ear. All these distinguishing characteristics (roughly hinted at in the above silly similes) are to me the "body of music" are to music what "looks", skin, hair are in a person, the actual stuff and manifestation whereby we know it and recognize it' `You said that too much such treatment annoyed, nerveteased you. Then let me thus tease you while you punish me for the annoyance I give you: Let me lay my weight upon, momi-ing at yr heavenbringing uma, while you thrash my bottom, back & legs in rising annoyance'