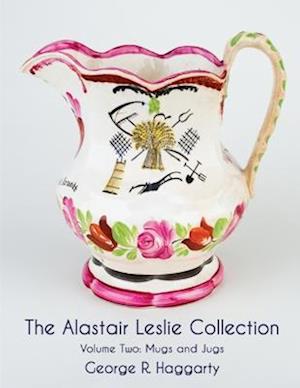 This book catalogues (with extensive photography) more pieces from The Alastair Leslie Collection. The first volume of the Leslie collection covered porcelain produced at West Pans in Scotland during the third quarter of the 18th century. Volume two moves on to cover Scottish folk art as represented as much as possible by Scottish east-coast pottery mugs and jugs produced prior to 1840.  George Haggarty has been extremely cautious with his attributions, but it is clear that the majority of the mugs and many of the jugs have strong east coast connection especially with the Fife and Perthshire areas. Many recorded the betrothal, marriage or birth of individuals and are often decorated with the tools of their trade. While there are no mugs with factory marks, the book highlights the similarity of painted flowers, style and inscriptions which can enable the identification of groups that came from different factories and even individual artists.