The Agincourt Campaign of 1415

- The Retinues of the Dukes of Clarence and Gloucester 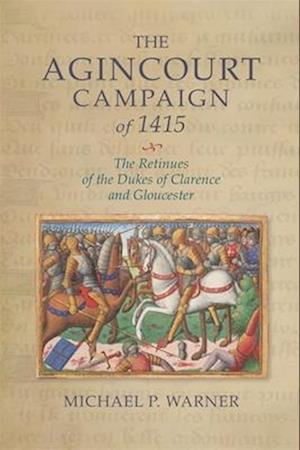 King Henry V's brothers, Thomas, duke of Clarence, and Humphrey, duke of Gloucester, recruited the two largest retinues of the famous army of 1415, whose service culminated in victory at Agincourt. At the heart of this book are case studies of these two retinues, the personnel of which have never been the subject of close scrutiny before. These retinues were made up of, respectively, 960 and 800 men, most of whose names are known from their complete surviving muster rolls. Using this crucial information, and by employing information from a wide range of sources, from official Chancery and Exchequer records to manorial accounts and personal the lives of many of these men can be reconstructed. One central theme of this book is concerned with the men themselves, and considers issues such as where they came from in 1415, their previous military, career and personal experiences, and whether they had pre-existing ties with either their ducal commander, sub-retinue captain or comrades. It charts the experience of the retinues from before the campaign (the mustering of the army), during the campaign (the siege of Harfleur and the Battle of Agincourt) and after the campaign (the future careers of some men and the influence the campaign had on the ducal affinities). It also considers wider historiographical issues relating to the "dynamics of recruitment", military professionalism, careerism, the changing socio-economic standing of those undertaking military service in the early fifteenth century, and the size and willingness to engage in martial activity of the English military community.