The Aesthetics of Island Space 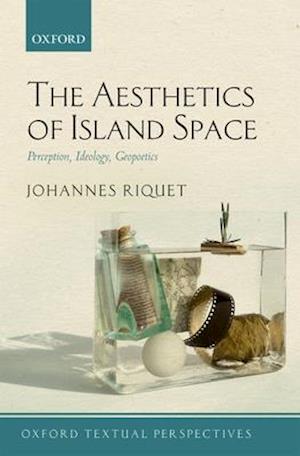 Oxford Textual Perspectives is a series of informative and provocative studies focused upon literary texts (conceived of in the broadest sense of that term) and the technologies, cultures, and communities that produce, inform, and receive them. It provides fresh interpretations of fundamental works and of the vital and challenging issues emerging in English literary studies. By engaging with the materiality of the literary text, its production, and reception history,and frequently testing and exploring the boundaries of the notion of text itself, the volumes in the series question familiar frameworks and provide innovative interpretations of both canonical and less well-known works.The Aesthetics of Island Space discusses islands as central figures in the modern experience of space. It examines the spatial poetics of islands in literary texts, from Shakespeare's The Tempest to Ghosh's The Hungry Tide, in the journals of explorers and scientists such as James Cook and Charles Darwin, and in Hollywood cinema. It traces the ways in which literary and cinematic islands have functioned as malleable spatial figures that offer vivid perceptualexperiences as well as a geopoetic oscillation between the material energies of words and images and the energies of the physical world. The chapters focus on America's island gateways (Roanoke and Ellis Island), visions of tropical islands (Tahiti and imagined South Sea islands), the islands of the US-Canadian border region in thePacific Northwest, and the imaginative appeal of mutable islands. It argues that modern voyages of discovery posed considerable perceptual and cognitive challenges to the experience of space, and that these challenges were negotiated in complex and contradictory ways via poetic engagement with islands. Discussions of island narratives in postcolonial theory have broadened understanding of how islands have been imagined as geometrical abstractions, bounded spaces easily subjected to the colonialgaze. There is, however, a second story of islands in the Western imagination which runs parallel to this colonial story. In this alternative account, the modern experience of islands in the age of discovery went hand in hand with a disintegration of received models of understanding global space.Drawing on and rethinking (post-)phenomenological, geocritical, and geopoetic theories, The Aesthetics of Island Space argues that the modern experience of islands as mobile and shifting territories implied a dispersal, fragmentation, and diversification of spatial experience, and it explores how this disruption is registered and negotiated by both non-fictional and fictional responses.

Forfattere
Bibliotekernes beskrivelse This volume studies the spatial poetics of islands as depicted in literature, the journals of explorers and scientists, and in film. It shows how voyages of discovery posed challenges to the experience of space and how such challenges were negotiated via poetic engagement with islands. 21 Illustrations