The AEC Mustang and Marshal 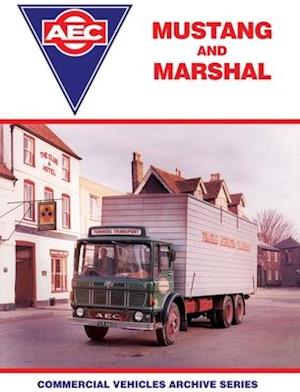 The AEC Mustang was announced in 1956 to be built at the former Maudslay works near Alcester. This twin-steering six wheeler 'Chinese Six' model was rated for 18 tons gross weight, placing it in the medium-weight range. Sales were moderate but the Mustang achieved some popularity as general haulage flats, tankers, box vans and tippers. By 1962 the Mustang concept was being superseded by AEC's new Marshal 6 x 2 conventional, medium-weight six-wheeler. This offered a higher gross vehicle weight and a better payload than the Mustang. From 1964 Marshals enjoyed ten years of popularity as general haulage lorries, benefiting from the great increase in UK road transport following the Beeching decimation of the railways. As the 1970s progressed they were increasingly replaced by articulated lorries, though they enjoyed continued sales to tipper operators, for quarries, as aggregate hauliers, for millers and cement firms. Several large users, such as the London Brick company, were still buying Marshals until the end of their production in 1977.Graham Edge tells this story knowledgeably, and includes a large number of museum-quality archive photographs of Mustangs and Marshals at work in a wide variety of situations.The Appendices cover chassis designations and details as well as Mustang and Marshal engines.

Forfattere
Bibliotekernes beskrivelse This book focuses on two models of truck which, although not achieving widespread popularity, became well loved in the niches where they excelled.