- The Next Generation of American Preeminence and the Coming Global Disaster 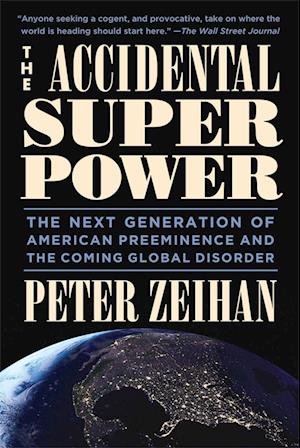 In the bestselling tradition of The World Is Flat and The Next 100 Years comes a contrarian and eye-opening assessment of American power.In THE ACCIDENTAL SUPERPOWER, international strategist Peter Zeihan examines how the hard rules of geography are eroding the American commitment to free trade; how much of the planet is aging into a mass retirement that will enervate capital supplies; and how it is the ever-ravenous American economy that is rapidly approaching energy independence. Combined, these factors are overturning the global system and ushering in a new (dis)order. For most, that is a disaster-in-waiting, but not for the Americans. The shale revolution allows Americans to sidestep a dangerous energy market. Only the U.S. boasts a youth population large enough to escape the sucking maw of global aging. Geography will matter more than ever in a de-globalizing world, and America's geography is simply sublime.

Forfattere
Bibliotekernes beskrivelse A counterintuitive look at why America will remain a superpower for the next fifty years.