- Performance and the Lyric in Early Greece 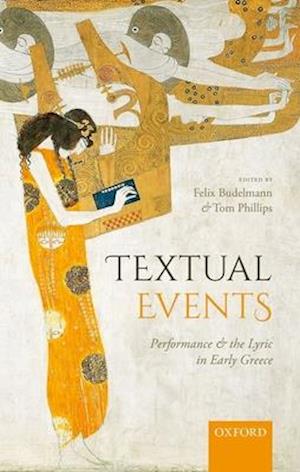 Recent decades have seen a major expansion in our understanding of how early Greek lyric functioned in its social, political, and ritual contexts, and the fundamental role song played in the day-to-day lives of communities, groups, and individuals has been the object of intense study. This volume places its focus elsewhere, and attempts to illuminate poetic effects that cannot be captured in functional terms alone. Employing a range of interpretative methods, itexplores the idea of lyric performances as 'textual events'. Some chapters investigate the pragmatic relationship between real performance contexts and imaginative settings, while others consider how lyric poems position themselves in relation to earlier texts and textual traditions, or discuss thedistinctive encounters lyric poems create between listeners, authors, and performers. Individual lyric texts and authors, such as Sappho, Alcaeus, and Pindar, are analysed in detail, alongside treatments of the relationship between lyric and the Homeric Hymns. Building on the renewed concern with the aesthetic in the study of Greek lyric and beyond, Textual Events aims to re-examine the relationship between the poems' formal features and their historical contexts. Lyric poems are a type of socio-political discourse, but they are also objects of attention in themselves. They enable reflection on social and ritual practices as much as they are embedded within them. As well as expressing cultural norms, lyric challenges listeners to think aboutand experience the world afresh.

Forfattere
Bibliotekernes beskrivelse In exploring the idea of lyric performances as 'textual events', this volume marks a departure from interpretations of Greek lyric as socio-political discourse. Building on the renewed concern with the aesthetic, it studies poetic effects that cannot be captured in terms of function alone and re-examines the relationship between form and context.