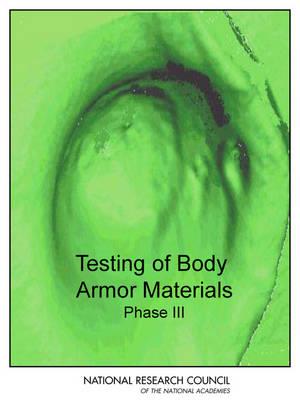 In 2009, the Government Accountability Office (GAO) released the report Warfighter Support: Independent Expert Assessment of Army Body Armor Test Results and Procedures Needed Before Fielding, which commented on the conduct of the test procedures governing acceptance of body armor vest-plate inserts worn by military service members. This GAO report, as well as other observations, led the Department of Defense Director, Operational Test & Evaluation, to request that the National Research Council (NRC) Division on Engineering and Physical Sciences conduct a three-phase study to investigate issues related to the testing of body armor materials for use by the U.S. Army and other military departments. Phase I and II resulted in two NRC letter reports: one in 2009 and one in 2010. This report is Phase III in the study. Testing of Body Armor Materials: Phase III provides a roadmap to reduce the variability of clay processes and shows how to migrate from clay to future solutions, as well as considers the use of statistics to permit a more scientific determination of sample sizes to be used in body armor testing.This report also develops ideas for revising or replacing the Prather study methodology, as well as reviews comments on methodologies and technical approaches to military helmet testing. Testing of Body Armor Materials: Phase III also considers the possibility of combining various national body armor testing standards.