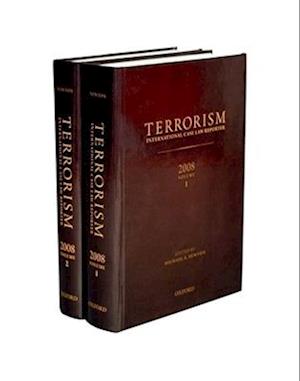 Published annually, Terrorism: International Case Law Reporter is a collection of the most important cases in security law from around the world. Handpicked and introduced by internationally renowned terrorism scholar Michael Newton and by a distinguished board of global experts, the cases included cover topics as diverse as human rights, immigration, freedom of speech, and terrorist financing. All cases are also accompanied by headnotes that summarize thekey issues for the benefit of researchers. This unique resource serves scholars, students, and practitioners seeking an authoritative and comprehensive resource for security law research like no other publication on the market.With the 2008 edition of the Terrorism: International Case Law Reporter, Oxford introduces detailed headnotes to the series. Professor Michael Newton and his team have provided, for each case, a robust summary and a concise statement of the case's central issues and holding. Professor Newton has also added Israel and the Middle East as necessary new regional topics for a series that covers terrorism-related jurisprudence worldwide. The 2008 edition includes cases highlighting issues such as:* The contentious issue of what legal status "enemy combatants" possess in U.S. courts.* The volatile issue of whether agents of a state may be held criminally liable for terrorism when carrying out official duties; exemplified by one of many prominent cases in this year's edition to come from non-U.S. courts, the Argentinean case Velasco, which appears in this edition is the only English translation available anywhere.* The treatment of terrorist suspects and the wide-ranging comparison of how different jurisdictions balance security interests against the need to provide constitutional and treaty-based protections to criminal defendants.* The financial aspects of terrorism and regional developments related to powerful terrorist groups. Each annual edition serves a function of unique and growing importance as the one source that juxtaposes international decisions with those emanating from domestic forums. The comprehensive index also helps the reader to synthesize the commonality of issues.This publication can also be purchased on a standing order basis.

Forfattere
Bibliotekernes beskrivelse Terrorism: International Case Law Reporter is the only print reporter of terrorism-related cases from jurisdictions worldwide. Handpicked and introduced by internationally renowned terrorism scholar Michael Newton and by a distinguished board of global experts, the cases included in this publication cover topics as diverse as human rights, immigration, freedom of speech, and terrorist financing.