Territory and Ideology in Latin America

indgår i serie Transformations in Governance 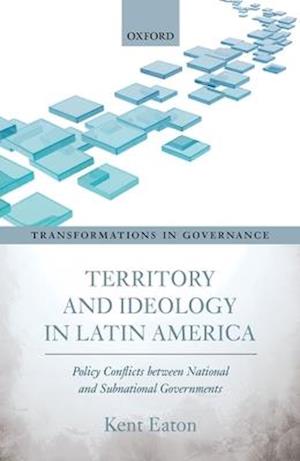 Around the world, familiar ideological conflicts over the market are becoming increasingly territorialized in the form of policy conflicts between national and subnational governments. Thanks to a series of trends like globalization, democratization, and especially decentralization, subnational governments are now in a position to more effectively challenge the ideological orientation of the national government. The book conceptualizes these challenges as operating in two related but distinct modes. The first stems from elected subnational officials who use their authority, resources, and legitimacy to design, implement, and defend subnational policy regimes that deviate ideologically from national policy regimes. The second occurs when these same officials use their authority, resources, and legitimacy to question, oppose, and alter the ideological content of national policy regimes. The book focuseson three similarly-situated countries in Latin America where these two types of policy challenges met different fates; neither challenge succeeded in Peru, both succeeded in Bolivia, and Ecuador experienced an intermediate outcome marked by the success of the first type of challenge (i.e. the defenceof a deviant, neoliberal subnational policy regime) and the failure of the second (i.e. the inability to alter a statist national policy regime). Derived from the in-depth study of these countries, the book's theoretical argument emphasizes three critical variables: 1) the structural significance of the territory over which subnational elected officials preside, 2) the level of institutional capacity they can harness, and 3) the strength of the societal coalitions they can build both within andacross subnational jurisdictions. Transformations in Governance is a major new academic book series from Oxford University Press. It is designed to accommodate the impressive growth of research in comparative politics, international relations, public policy, federalism, environmental and urban studies concerned with the dispersion of authority from central states up to supranational institutions, down to subnational governments, and side-ways to public-private networks. It brings together work that significantlyadvances our understanding of the organization, causes, and consequences of multilevel and complex governance. The series is selective, containing annually a small number of books of exceptionally high quality by leading and emerging scholars. The series targets mainly single-authored or co-authored work, but it is pluralistic in terms of disciplinary specialization, research design, method, and geographical scope. Case studies as well as comparative studies, historical as well as contemporary studies, and studies with a national, regional, or international focus are all central to its aims. Authors use qualitative, quantitative, formal modeling, or mixed methods. A trade mark of the books is that they combine scholarly rigour withreadable prose and an attractive production style. The series is edited by Liesbet Hooghe and Gary Marks of the University of North Carolina, Chapel Hill, and Walter Mattli of the University of Oxford.

Forfattere
Bibliotekernes beskrivelse This book examines the connection between territorial politics and ideological conflict in the global economic sphere, particularly in Latin America, based on in-depth field research in Bolivia, Ecuador, and Peru.