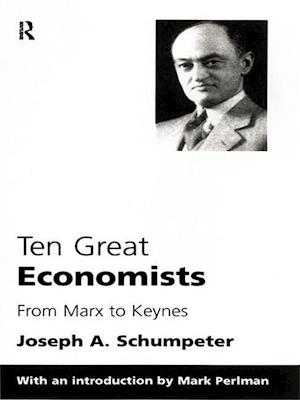 Originally published in 1952, this seminal work is reproduced here with a new introduction by Professor Mark Perlman, a well-known Schumpeterian scholar. The essays, written between 1910-50 were primarily commemorative pieces marking the achievement of a celebrated economist. Those covered include:* Marx* Walras* Menger* Marshall* Pareto* Bohm-Bawerk* Taussig* Fisher* Mitchell* KeynesThe appendix includes articles on lesser-known economists Knapp, Von Wieser; Von Bortkiewicz.With the exception of Marx, Schumpeter himself selected the ten main essays for inclusion in this volume and was personally acquainted with all but two of his subjects. Initially considering them unworthy for publication he relented in the face of public demand since the journals in which they originally appeared were difficult to obtain.The new introduction places this work in its contemporary context and highlights its importance for students unfamiliar with the original.

Forfattere
Bibliotekernes beskrivelse Originally published in 1952, this work is reproduced with a new introduction by Professor Mark Perlman, a Schumpeterian scholar. The essays, written between 1910-50 include coverage of: Marx; Walras; Menger; Marshall; Pareto; Bohm-Bawerk; Taussig; Fisher; Mitchell; and Keynes.