- Proceedings of the Symposium on Cosmochemistry, Held at the Smithsonian Astrophysical Observatory, Cambridge, Mass., August 14-16, 1972 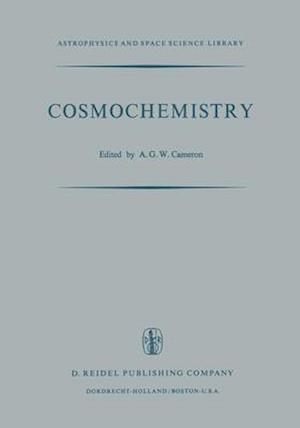 The International Association of Geochemistry and Cosmochemistry was organized in 1967, and held its first meeting at UNESCO Headquartels that year in association with its symposium on The Origin and Distribution of the Elements'. The Association is a member of the International Union uf Geological Sciences, and holds regular meetings at the time of the I nternatlOnal Geological Congresses, the last of which was held in Montreal, in August. 1972. The IAGC was organized to coordinate activities on an international scale in a wide variety of branches of geochemistry. Its activities are carried on through Commissions and Working Groups, and by means of symposia and other international activities. It has national, corporate, and individual members. One of the first actions taken by the Council of the [AGC when it met in 1967 was to establish an initial set of Working Groups to commence the activity of the organization. Among these Working Groups was one on Extraterrestrial Chemistry, established under the chairmanship of the writer. This Working Group recognized that its basic concern with the chemical composition of cosmic systems was a problem with ramifications in many fields in addition to geochemistry. The other scien tific disciplines which are involved include physics, astronomy and astrophysics, and geophysics. The Working Group thus included scientists in these disciplines from the beginning; many of the scientists had already participated in the first symposium of the IAGe. The Working Group has recently been elevated to the status of a Commission.