Telomeres and Telomerase in Aging, Disease, and Cancer 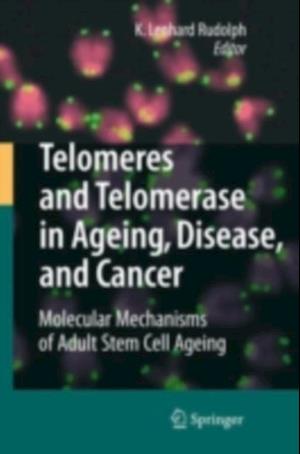 Twenty-five years after the disclosure of the telomeric DNA sequence and 22 years after the discovery of telomerase, it has become clear that telomeres and telomerase influence disease of human ageing including cancer. This book summarizes our current knowledge on the role of telomeres and telomerase in ageing, regeneration, and cancer with a special focus on ageing stem cells. Moreover, the book reviews current ef forts to target telomeres and telomerase for anticancer treatment or reg- erative therapies. 1. 1 Ageing The molecular analysis of ageing is an emerging research field that will have great impact on patients care, lifestyle, and on disease prevention in the human population worldwide. Major molecular mechanisms that influence the ageing process include (1) the accumulation of molecular damage affecting DNA and p- teins, (2) alterations in gene expression, including alterations in checkpoint responses, metabolic pathways, and developmental pathways, and (3) the decline in adult stem cell function. All these mechanisms lead to a decrease in organ main- nance and function, thus representing a major factor limiting the quality of life d- ing ageing. Moreover, the accumulation of molecular damage increases genetic alterations and the cancer risk during ageing. Indeed, increased age is the leading cause of cancer. Understanding the molecular basis of ageing will ultimately point to targets for novel therapies aiming to improve the function of cells and organs in the ageing organism, thus allowing increased vitality or what we think of as 'healthy ageing.