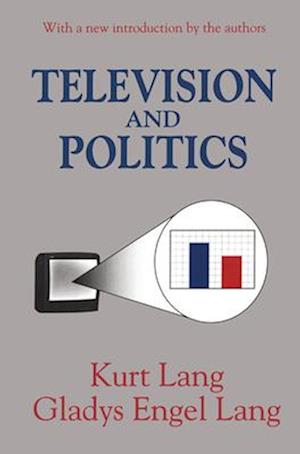 "The authorsahave analyzed the television problem brilliantly. They had come up with a whole set of new insights, and their backup research always is fascinating to read."-Saturday Review"A cautious, research-based bookahopefully it will set a trend."-Ithiel de Sola Pool, Public Opinion QuarterlyAfter more than forty years of studying its political implications, Kurt and Gladys Lang put the power of television into a unique perspective. Through carefully compiled case studies, they reveal surprising truths about TV's effect on American political life, and explode some popular myths. Their theme throughout is that television gives the viewer the illusion of being a favored spectator at some event-he "sees for himself," in other words. But, in fact, it conveys a reality different from that experienced by an eyewitness. Because the televised version of an event reaches more people, it has greater impact on the public memory and comes to overshadow what actually happened.The Langs tell in detail how television shapes events; how public figures and political institutions adjust their tactics to exploit the effects they-and millions of viewers-think television has. They examine such issues as whether or not network television projections influence election results. They consider the accuracy of the networks increasingly sophisticated techniques for "calling" election outcomes well before polls close. Such concerns have never been more at the forefront of the public consciousness than in the wake of the 2000 presidential election. The Langs assess the research to date and clarify the effects of early TV projections on voter turnout and election outcomes, and look at the implications for our system of government.A model of excellent policy analysis, this highly readable volume will interest decision-makers and analysts, as well as students of journalism, broadcasting, political behavior, and voters looking forward to the next election.Kurt Lang was a professor of sociology and political science at Stony Brook before becoming the Director of the School of Communications at the University of Washington. Gladys Engel Lang is a professor of communications with joint appointments in Political Science and Sociology at the University of Washington. In addition to Television and Politics, the Langs have also co-authored The Battle for Public Opinion: the President, the Press and the Polls during Watergate, Voting and Nonvoting, and Collective Dynamics.