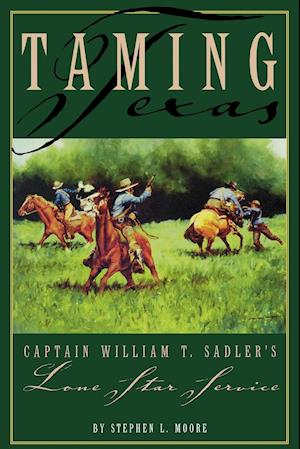 The history of Texas is usually told in terms of its "giants" such as Sam Houston and Stephen F. Austin. Here, instead, is a history of Texas told by one of its lesser giants, William Turner Sadler (1797-1884), whose biography becomes the framework for an exciting view of Texas History. Sadler, one of the leading pioneers of nineteenth-century Texas, participated in most of the major events of the period. He migrated to Texas from Georgia in 1835 to become a farmer. He soon found himself in command of a ranger company that built Fort Houston, served as a private in the battle of San Jacinto, was active in quelling the Cordova Rebellion, and became a leader in the campaign against Chief Bowles and the Cherokees. Eventually her served as a representative in both the Republic Congress and the state legislature. During the Civil War, at the age of sixty-six, Sadler served in Terrell's Texas Cavalry. Stephen L. Moore, a sixth generation Texan, graduated from Stephen F. Austin State University in Nacogdoches, where he studied journalism and advertising. He has been an accounting manager for a Houston-based firm which serves the retail advertising industry. Moore's interest in military history and efforts in writing continue to combine as a part-time hobby. He previously combined with William J. Shinneman and Robert W. Gruebel to write The Buzzard Brigade: Torpedo Squadron Ten at War (Missoula, Montana: Pictorial Histories Publishing Company). Steve, his wife Cindy, and their two daughters currently make their home in the Dallas area.