- A Brief Guide to Our Human-Robot Futures 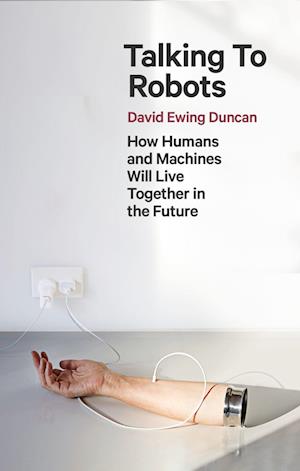 'A refreshing variation on the will-intelligent-robots-bring-Armageddon genre . . . this colorful mixture of expert futurology and quirky speculation does not disappoint' Kirkus'A robot may not injure a human being or, through inaction, allow a human being to come to harm.' Isaac Asimov, The First Law of RoboticsWhat robot and AI systems are being built and imagined right now? What do they say about us, their creators? Will they usher in a fantastic new future, or destroy us? What do some of our greatest thinkers, from physicist Brian Greene and futurist Kevin Kelly to inventor Dean Kamen, geneticist George Church and filmmaker Tiffany Shlain, anticipate for our human-robot future? For even as robots and AI intrigue us and make us anxious about the future, our fascination with robots has always been about more than the potential of the technology - it also concerns what robots tell us about being human.From present-day Facebook and Amazon bots to near-future 'intimacy' bots and 'the robot that swiped my job' bots, bestselling American popular science writer David Ewing Duncan's Talking to Robots is a wonderfully entertaining and insightful guide to possible future scenarios about robots, both real and imagined.Featured bots include robot drivers; doc bots; politician bots; warrior bots; sex bots; syntheticbio bots; dystopic bots that are hopefully just bad dreams; and ultimately, God Bot (asdescribed by physicist Brian Greene). These scenarios are informed by discussions with well-known thinkers, engineers, scientists, artists, philosophers and others, who share with us their ideas, hopes and fears about robots. David spoke with, among others, Kevin Kelly, David Baldacci, Brian Greene, Dean Kamen, Craig Venter, Stephanie Mehta, David Eagleman, George Poste, George Church, General R. H. Latiff, Robert Seigel, Emily Morse, David Sinclair, Ken Goldberg, Sunny Bates, Adam Gazzaley, Tim O'Reilly, Tiffany Shlain, Eric Topol and Juan Enriquez.These discussions, along with some reporting on bot-tech, bot-history and real-time societal andethical issues with robots, are the launch pads for unfurling possible bot futures that are informed by how people and societies have handled new technologies in the past.The book describes how robots work, but its primary focus is on what our fixation with botsand AI says about us as humans: about our hopes and anxieties; our myths, stories, beliefs andideas about beings both real and artificial; and our attempts to attain perfection.We are at a pivotal moment when our ancient infatuation with human-like beings with certainattributes or superpowers - in mythology, religion and storytelling - is coinciding with ourability to actually build some of these entities.

Forfattere
Bibliotekernes beskrivelse Award-winning journalist David Ewing Duncan sketches twenty-four visions of possible human-robot futures - short scenarios grounded in present-day technologies and ideas, but inspired by imagination. He explores how robots and AI systems may impact on individuals and societies over the next few years, centuries and beyond - for better or for worse.