- Language and the Production of Age in the Marshall Islands

indgår i serie Oxf Studies in Anthropology of Language 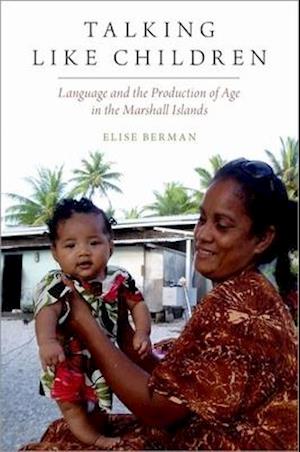 Children in the Marshall Islands do many things that adults do not. They walk around half naked. They carry and eat food in public without offering it to others. They talk about things they see rather than hiding uncomfortable truths. They explicitly refuse to give. Why do they do these things?Many think these behaviors are a natural result of children's innate immaturity. But Elise Berman argues that children are actually taught to do things that adults avoid: to be rude, inappropriate, and immature. Before children learn to be adults, they learn to be different from them. Berman's main theoretical claim therefore is also a novel one: age emerges through interaction and is a social production. In Talking Like Children, Berman analyzes a variety of interactions in the Marshall Islands, all broadly based around exchange: adoption negotiations, efforts to ask for or avoid giving away food, contentious debates about supposed child abuse. In these dramas both large and small, age differences emerge through the decisions people make, the emotions they feel, and the power they gain. Berman's research includes a range of methods - participant observation, video and audiorecordings, interviews, children's drawings - that yield a significant corpus of data including over 80 hours of recorded naturalistic social interaction. Presented as a series of captivating stories, Talking Like Children is an intimate analysis of speech and interaction that shows what age means. Like gender and race, age differences are both culturally produced and socially important. The differences between Marshallese children and adults give both groups the ability to manipulate social life in distinct but often complementary ways. These differences produce culture itself. Talking Like Children establishes age as afoundational social variable and a central concern of anthropological and linguistic research.

Forfattere
Bibliotekernes beskrivelse Talking Like Children is a series of captivating stories that show how age comes to be. Elise Berman analyzes adoption negotiations, efforts to keep food, and debates about supposed child abuse. In these situations, age differences emerge through the decisions people make, the emotions they feel, and the power they gain. 26 illus.