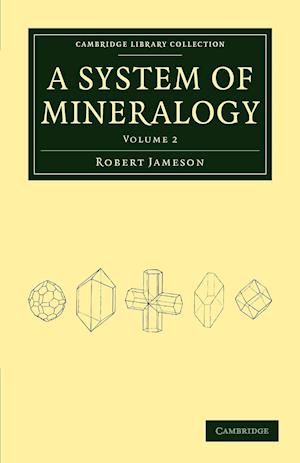 Robert Jameson (1774-1854) was a renowned geologist who held the chair of natural history at Edinburgh from 1804 until his death. A pupil of Gottlob Werner at Freiberg, he was in turn one of Charles Darwin's teachers. Originally a follower of Werner's influential theory of Neptunism to explain the formation of the earth's crust, and an opponent of Hutton and Playfair, he was later won over by the idea that the earth was formed by natural processes over geological time. He was a controversial writer, accused of bias towards those who shared his Wernerian sympathies such as Cuvier, while attacking Playfair, Hutton and Lyell. He built up an enormous collection of geological specimens, which provided the evidence for his System of Mineralogy, first published in 1808 and here reprinted from the second edition of 1816. Volume 2 continues 'earthy minerals' and covers saline and inflammable minerals, including coals.

Forfattere
Bibliotekernes beskrivelse Robert Jameson (1774-1854) was professor of natural history at Edinburgh for fifty years. A follower of Werner's influential theory of the formation of the Earth, he later accepted the idea that the Earth was formed by natural processes over geological time. His System of Mineralogy was first published in 1808. 3 Plates, black and white