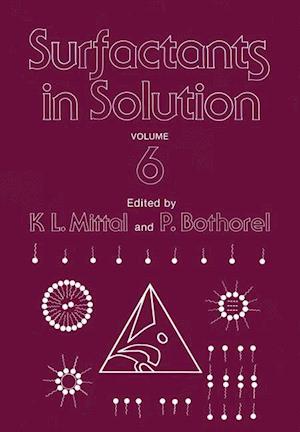 This and its companion Volumes 4 and 5 document the proceedings of the 5th International Symposium on Surfactants in Solution held in Bordeaux, France, July 9-13, 1984. This symposium was the continuation of the series of symposia initiated in 1976 in Albany, New Vork under the title ""icellization, Solubilization and "icroemulsions". The next two symposia were labelled "Solution Chemistry of Surfactants" and "Solution Behavior of Surfactants: Theoretical and Applied Aspects" held in Knoxville, TN in 1978 and Potsdam, N. V. in 1980, respectively. In 19B2 at the time of the 4th Symposium in this series, it became amply evident that there was a definite need to have more a generic title to describe these biennial events, and after much deliberation it was decided that an appropriate title would be "Surfactants in Solution" as both the aggregation and adsorption aspects of surfactants were addressed. So the 4th Symposium was held in 1982 in Lund, Sweden, under this new rubric, and it was decided to continue these symposia in the future under this appellation. Naturally, the Bordeaux Symposium was dubbed as the 5th International Symposium on Surfactants in Solution, and our logo became SIS which is very apropos and appealing. It was in Bordeaux that the decision was made to hold the 6th SIS Symposium in New Delhi and it is scheduled for August 18-22, 1986 in the capital of India.

Forfattere
Bibliotekernes beskrivelse This and its companion Volumes 4 and 5 document the proceedings of the 5th International Symposium on Surfactants in Solution held in Bordeaux, France, July 9-13, 1984. 1 Paperback / softback 600 p.