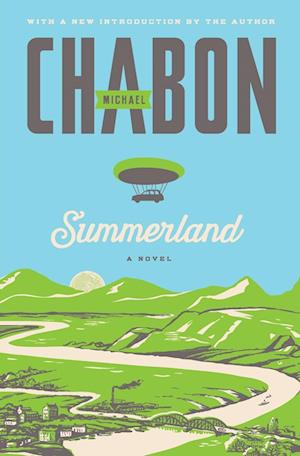 From the Pulitzer Prize winning Michael Chabon comes this bestselling novel for readers of all ages that blends fantasy and folklore with that most American coming-of-age ritual: baseball--now in a new edition, with an original introduction by the author.

Ethan Feld is having a terrible summer: his father has moved them to Clam Island, Washington, where Ethan has quickly established himself as the least gifted baseball player the island has ever seen. Ethan's luck begins to change, however, when a mysterious baseball scout named Ringfinger Brown and a seven-hundred-and-sixty-five-year-old werefox enter his life, dragging Ethan into another world called the Summerlands. But this beautiful, winter-less place is facing destruction at the hands of the villainous Coyote, and it has been prophesized that only Ethan can save it.

In this cherished modern classic, the New York Times bestselling, Pulitzer Prize winning author brings his masterful storytelling, dexterous plotting, and singularly envisioned characters to a coming-of-age novel for readers of all ages.

A magical novel for readers of all ages that blends fantasy and folklore with that most American coming-of-age ritual: baseball--now in a new edition, with an original introduction by the author.

For over a century, the people of Clam Island, Washington, have enjoyed barbecues and baseball games at Summerland, on the western tip of the island, where it never rains. The small beings--known as ferishers--who ensure this perfect weather, however, are threatened by an ancient enemy and need a hero--a baseball star, in fact--to vanquish their foe. Summerland is the story of Ethan Feld, the worst ballplayer in the history of the game, recruited by a hundred-year-old scout called Ringfinger Brown, himself a Negro Leagues legend. Accompanied by his determined friend Jennifer T. Rideout and guided by a friendly werefox, Ethan struggles to defeat giants, bat-winged goblins, and one of the toughest ballclubs in the realms of magic to save all the Summerlands--and ultimately the world.

"His work is page-turning and poignant; he is one of the best writers of English prose alive. . . . He wants to move and thrill us both, and he does."-Washington Post Book World

"A prose magician, Chabon is that rare literary anomaly: a gentle-spirited writer of boundless ambition."-Village Voice

"Michael Chabon is an escape artist: his novels are elegant and energetic circus tricks which celebrate, again and again, the joy of release from the constraints of the everyday world."-Financial Times