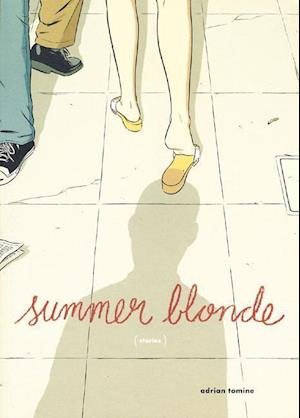 Adrian Tomine's cult comix series Optic Nerve is finally collected into one sharp-looking hardcover graphic novel. Described as the Raymond Carver of comix, Tomine constructs tales of emotional disconnection with an ear for painfully real dialogue. Combined with his deft black and white depictions of urbane lifestyles, Tomine's fans have often accused him of eavesdropping in on their most intimate moments and, with forensic skill, laying their lives bare. The conflicts between emotional gratification, narcissistic neediness and moral discernment mark the title story - "Summer Blonde" - in which a socially crippled man nurses an obsessive crush on a young woman. He watches close up, paralyzed by his guilt, as her beauty catches the eye of his neighbor: a hip, selfish young man with a short attention span. One of Optic Nerve's most popular stories, Hawaiian Getaway, features Hilary, telephone service rep who is having the worst week of her life. She lost her job, her apartment, and her grandmother. Close to the edge, she is losing her grip. Reaching out to random strangers on the phone, Hilary is looking for someone to help her. In "Alter Ego" a successful young author has writer s block. He can t, or won t, decide between another ghostwriting gig and finishing his second 'real' novel. He stalls on committing to his novel and his girlfriend when a chance postcard leads him to flirt with fantasies of changing the past. Finally, "Bomb Scare" documents the early unease of his generation by setting this coming-of-age story during the tense months of the Gulf War, the event that ushered in the 1990s.

Forfattere
Bibliotekernes beskrivelse With a deft and romantic touch, Tomine portrays the emotional ambivalence of drifting, urban twenty-somethings in stunning black and white. His fans accuse him of eavesdropping on their most intimate moments, exhibiting their insecurities with both forensic detachment and surprising compassion.