Summary of Caitlin Doughty's From Here to Eternity 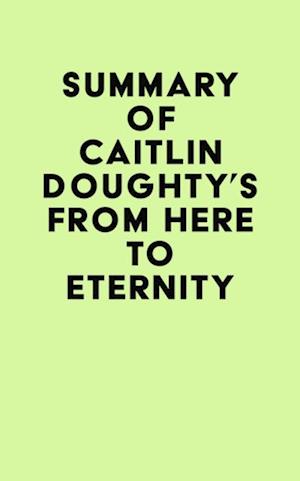 Please note: This is a companion version & not the original book. Book Preview: #1 The cremation was scheduled to start at 7 a. m. Just as the sun broke through the blue light of dawn, the mourners began to gather. A gong rang through the air, and as her body caught fire, white smoke swirled about in tiny cyclones. The smell called to mind a passage from Edward Abbey: The fire.#2 In the late 1960s, in the Australian Outback, a young geologist discovered the cremated bones of an adult woman that might be up to 20,000 years old. The woman lived in a verdant landscape filled with giant creatures. For food, she collected fish, seeds, and the eggs of enormous emus.#3 The town of Crestone, Colorado, is a melting pot of spiritual seekers. It attracts people from all over the world who come to meditate there, and many are lifelong practitioners.#4 The first body to undergo a modern, scientific cremation in America was that of Baron Joseph Henry Louis Charles De Palm. His cremation was scheduled for December 1876, six months after his death. In the interim his corpse was injected with arsenic, and his organs were pulled from his body and his skin was covered with clay and carbolic acid by a local undertaker.