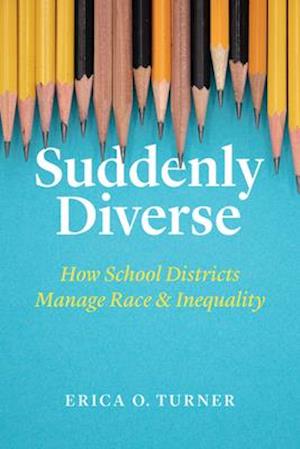 For the past five years, American public schools have enrolled more students identified as Black, Latinx, American Indian, and Asian than white. At the same time, more than half of US school children now qualify for federally subsidized meals, a marker of poverty. The makeup of schools is rapidly changing, and many districts and school boards are at a loss as to how they can effectively and equitably handle these shifts.Suddenly Diverse is an ethnographic account of two school districts in the Midwest responding to rapidly changing demographics at their schools. It is based on observations and in-depth interviews with school board members and superintendents, as well as staff, community members, and other stakeholders in each district: one serving "Lakeside," a predominately working class, conservative community and the other serving "Fairview," a more affluent, liberal community. Erica O. Turner looks at district leaders' adoption of business-inspired policy tools and the ultimate successes and failures of such responses. Turner's findings demonstrate that, despite their intentions to promote "diversity" or eliminate "achievement gaps," district leaders adopted policies and practices that ultimately perpetuated existing inequalities and advanced new forms of racism. While suggesting some ways forward, Suddenly Diverse shows that, without changes to these managerial policies and practices and larger transformations to the whole system, even district leaders' best efforts will continue to undermine the promise of educational equity and the realization of more robust public schools.