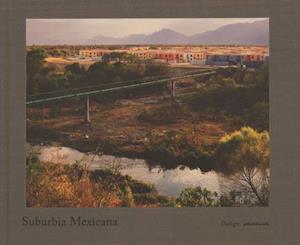 Alejandro Cartagena photographs the homes, rivers, ruins, riches and inhabitants of the suburbs of Monterrey, Mexico. These beautifully quiet color photographs are stark documents of the chaos and destruction that result from misguided urban planning. Suburbia Mexicana is a visual portrait of neoliberal economic policies, and a plea for responsible development in a rapidly changing world.Alejandro Cartagena lives and works in Monterrey, Mexico. His projects employ landscape and portraiture as a means to examine social, urban and environmental issues. His work has been exhibited internationally and is in the collections of several museums including the SFMOMA, the Museum of Contemporary Photography in Chicago, the Museum of Fine arts Houston, the Portland Museum of Art, the Museo de Arte Moderno in Rio, Brazil, the Fototeca de Nuevo Leon, Mexico and the Fototeca Nacional in Pachuca, Mexico.Karen Irvine, curator and associate director of the Museum of Contemporary Photography (MoCP) at Columbia College Chicago, was born and raised in Chicago. She studied International Relations and French as an undergraduate, worked in Prague in her early 20s and did photography as a hobby. Once she realized her passion for photography Irvine decided to go to graduate school in Prague at the Film and TV School of the Academy of Performing Arts, or FAMU, and graduated with an MFA in Photography.Gerardo Montiel Klint,1968, Mexico, is an avid consumer and creator of visual culture, making a name for himself as one of Latin America's most exciting and important contemporary photographers. He originally received a BFA in Product Design, before realising his passion lay with the world of still and moving images. He went on to study photography at the Escuela Activa de Fotografia and Centro de la Imagen in Mexico City and has since taught, published and exhibited all over the world. He is the co-founder of the HYDRA platform a network of photographers, curators, publishers and institutions, he is a member of various advisory boards including the San Diego Museum of Photographic Arts, he is co-director of Klint & Photo a photographic production house, and he has taught workshops and seminars since 1998. His work is housed in collections globally, including those at the Kiyosato Museum of Photographic Arts in Japan, Guangdong Museum of Arts in China, Museet for Fotokunst in Denmark and the Museo de Modern Art Rio de Janeiro in Brazil.Lisa Uddin is an Assistant Professor of Art History and Visual Culture Studies at Whitman College and the author of "Zoo Renewal: White Flight and the Animal Ghetto" (University of Minnesota Press, 2015). Her work considers human/nonhuman entanglements in American visual culture and the built environment. She is active in the fields of American Studies, Visual Culture, Architecture and Design, Urban History, Art History, Critical Theory, Animal Studies, Critical Race Studies, and African American Studies. She has held fellowships through the Mellon Foundation's Quadrant initiative, Brown University's Pembroke Center for Teaching and Research on Women, the Smithsonian Institution, and the Social Science and Humanities Research Council of Canada. Her articles and reviews have appeared in a number of journals, including Parallax, Topia, Humanimalia, Public: Art/Culture/Ideas, Afterimage, and Reviews in Cultural Theory. She is currently developing a new project, provisionally titled "Survival Modes: Racialization and Radical Design," which considers how nonnormative design practices have intervened into diminishing life chances in the U.S. since the 1960s.