- The Western Education of Colonial India 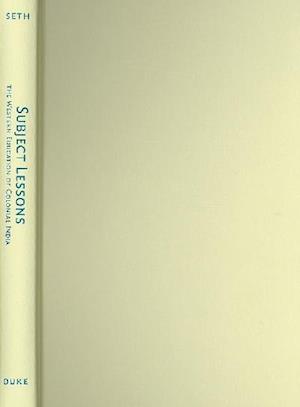 Subject Lessons offers a fascinating account of how western knowledge "traveled" to India, changed that which it encountered, and was itself transformed in the process. Beginning in 1835, India's British rulers funded schools and universities to disseminate modern, western knowledge in the expectation that it would gradually replace indigenous ways of knowing. From the start, western education was endowed with great significance in India, not only by the colonizers but also by the colonized, to the extent that today almost all "serious" knowledge about India-even within India-is based on western epistemologies. In Subject Lessons, Sanjay Seth's investigation into how western knowledge was received by Indians under colonial rule becomes a broader inquiry into how modern, western epistemology came to be seen not merely as one way of knowing among others but as knowledge itself.Drawing on history, political science, anthropology, and philosophy, Seth interprets the debates and controversies that came to surround western education. Central among these were concerns that Indian students were acquiring western education by rote memorization-and were therefore not acquiring "true knowledge"-and that western education had plunged Indian students into a moral crisis, leaving them torn between modern, western knowledge and traditional Indian beliefs. Seth argues that these concerns, voiced by the British as well as by nationalists, reflected the anxiety that western education was failing to produce the modern subjects it presupposed. This failure suggested that western knowledge was not the universal epistemology it was thought to be. Turning to the production of collective identities, Seth illuminates the nationalists' position vis-a-vis western education-which they both sought and criticized-through analyses of discussions about the education of Muslims and women.