Subaltern History of the Indian Diaspora in Singapore

- The Gradual Disappearance of Untouchability 1872-1965 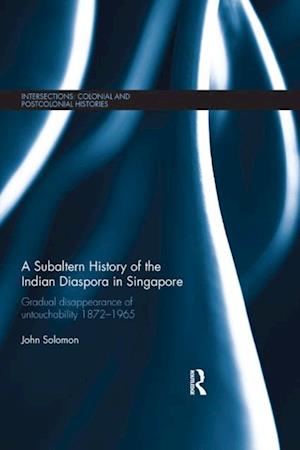 Untouchable migrants made up a substantial proportion of Indian labour migration into Singapore in the nineteenth and twentieth centuries. During this period, they were subject to forms of caste prejudice and discrimination that powerfully reinforced their identities as untouchables overseas. Today, however, untouchability has disappeared from the public sphere and has been replaced by other notions of identity, leaving unanswered questions as to how and when this occurred. The untouchable migrant is also largely absent from popular narratives of the past.This book takes the 'disappearance' as a starting point to examine a history of untouchable migration amongst Indians who arrived in Singapore from its modern founding as a British colony in the early nineteenth century through to its independence in 1965. Using oral history records, archival sources, colonial ethnography, newspapers and interviews, this book examines the lives of untouchable migrants through their everyday experience in an overseas multi-ethnic environment. It examines how these migrants who in many ways occupied the bottom rungs of their communities and colonial society, framed transnational issues of identity and social justice in relation to their experiences within the broader Indian diaspora in Singapore. The book trances the manner in which untouchable identities evolved and then receded in response to the dramatic social changes brought about by colonialism, war and post-colonial nationhood. By focusing on a subaltern group from the past, this study provides an alternative history of Indian migration to Singapore and a different perspective on the cultural conversations that have taken place between India and Singapore for much of the island's modern history.