- Demetriou, K: Studies on the Reception of Plato and Greek Po 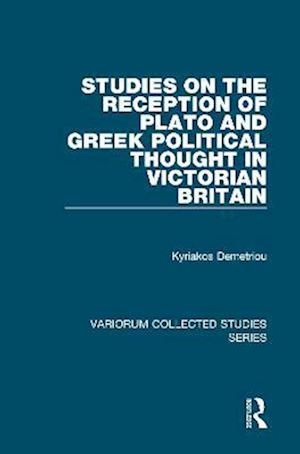 This collection of essays focuses on the reception of Plato and Greek political thought in the work of some major (pre)Victorian classical scholars and expands on a remarkable range of hotly debated issues on the interpretation of Greek antiquity. The central figure in this volume is the radical philosopher, utilitarian, and Platonist George Grote, whose works on the history of Greece and Plato moved away from traditional models of classical interpretation. His works and their background are critically explored in light of his philosophical commitment and political radicalism. Article IV brings to light a forgotten manuscript by Grote, "On the Character of Socrates," produced in the 1820s. Grote sought to counter the current literature on ancient Greece and its predominant motifs, which is here examined in its own right along with an independent study on Bishop Connop Thirlwall's influential History of Greece. The second half of this volume is devoted to analyzing important aspects of the revival of Platonic studies in the ideological and discursive context of early and middle Victorian times. This collection of essays presents comprehensive and illuminating contextual analyses of nineteenth-century works on classical reception, providing simultaneously a rich bibliographic guide to further research.

Forfattere
Bibliotekernes beskrivelse A collection of essays that provides a revealing map of nineteenth- century classical scholarship, as it reconstructs an immensely important section of the Victorian Study of the Greek heritage - an arena of thoroughly engaged scholarship and writing.