Struggle and Suffrage in Watford

- Women's Lives and the Fight for Equality

indgår i serie Struggle and Suffrage 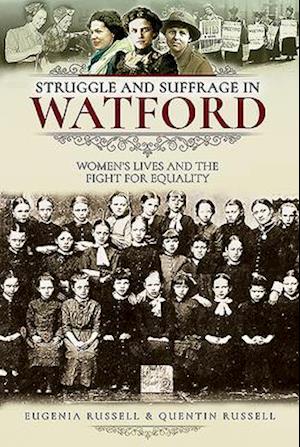 This book shines a light on the many areas of female activity in and around Watford, both in the home and at work, in traditional rural employment or in dressmaking, textiles and the silk industry. The lives of local women are put into the context of the national movement to address inequality and injustice, highlighting the often difficult lives of those employed in domestic service, the impact of poor housing and terrible poverty on women's lives and the efforts to redress the situation and the changes in social hierarchy. Within the broad spectrum of life, individual stories show that there were still opportunities for women to take control of their lives, some excelling as entrepreneurs - owning shops, pubs and other businesses.

During this time of immense social change, pioneering women within the community set the example for others to follow, whether as political activists and suffragettes connecting with the feminist issues of their times or as prominent members of the community dedicating their lives to the needs of others. The region was notable for fostering the talents of numerous prominent artists, Lucy Kemp-Welch, the illustrator of Black Beauty and creator of many recognizable war propaganda posters being the most famous, but also in the sciences, such as Harriette Chick, who worked in the Lister Institute in Elstree.

Education became of increasing importance and this was reflected in the growth of the number of schools taken female pupils and employing women as teachers, a number of which were set up philanthropically specifically for girls. Schooling for girls improved their opportunities and in times of crisis, the country came to rely on the varied contribution women could make - from skilled and devoted nurses staffing the hospitals to technicians in the factories in times of war - leading to the reappraisal of the role of women in postwar Britain.