- Ideas for a Sane World Economy 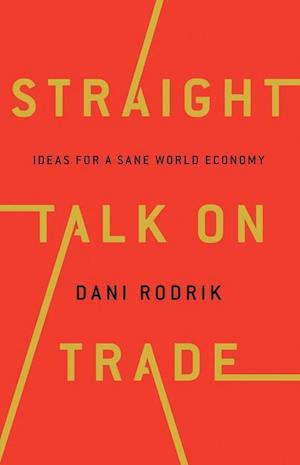 Not so long ago the nation-state seemed to be on its deathbed, condemned to irrelevance by the forces of globalization and technology. Now it is back with a vengeance, propelled by a groundswell of populists around the world. In Straight Talk on Trade, Dani Rodrik, an early and outspoken critic of economic globalization taken too far, goes beyond the populist backlash and offers a more reasoned explanation for why our elites' and technocrats' obsession with hyper-globalization made it more difficult for nations to achieve legitimate economic and social objectives at home: economic prosperity, financial stability, and equity.

Rodrik takes globalization's cheerleaders to task, not for emphasizing economics over other values, but for practicing bad economics and ignoring the discipline's own nuances that should have called for caution. He makes a case for a pluralist world economy where nation-states retain sufficient autonomy to fashion their own social contracts and develop economic strategies tailored to their needs. Rather than calling for closed borders or defending protectionists, Rodrik shows how we can restore a sensible balance between national and global governance. Ranging over the recent experiences of advanced countries, the eurozone, and developing nations, Rodrik charts a way forward with new ideas about how to reconcile today's inequitable economic and technological trends with liberal democracy and social inclusion.

Deftly navigating the tensions among globalization, national sovereignty, and democracy, Straight Talk on Trade presents an indispensable commentary on today's world economy and its dilemmas, and offers a visionary framework at a critical time when we need it most.

"All economists should read Straight Talk on Trade to appreciate how their own models are often richer than their policy advice. And all noneconomists should read this book to appreciate how much economics has to offer on the biggest questions of growth and inequality. The length of this book belies its stunning scope, ranging from developed to developing countries, the past to the present, and political science to economics. Dani Rodrik's eclectic methodology and advice support his unwavering, optimistic belief that economic ideas can and should help people shape their destinies."--Jason Furman, Harvard Kennedy School and former chairman of the White House Council of Economic Advisers

"There is a ton of erudition and not an ounce of orthodoxy in this compact, incisive book. Dani Rodrik analyzes policy like an economist and analyzes economics like a philosopher. The net effect is a disarmingly fresh and penetrating set of insights on national self-determination, fair versus free trade, and the rich interplay between markets, governments, and individual identity in sustaining stable nation-states. Arguing for a rethinking and rebalancing of the teetering project of globalization, Rodrik offers something to delight and offend every reader."--David Autor, Massachusetts Institute of Technology

"Dani Rodrik is one of the most original thinkers today on economics and development. In Straight Talk on Trade, he explains why there is so much discontentment with the multilateral system, and offers interesting proposals for how we might preserve what is good about it. This is a must-read for anyone interested in the roots of populist nationalism and the widespread angst in industrial societies today."--Raghuram Rajan, University of Chicago

"Straight Talk on Trade presents a straightforward and readable agenda to make globalization serve democracy rather than undermine it, while avoiding the populist remedies being hawked by politicians today."--Francis Fukuyama, Stanford University

"Amongst today's mainstream economists, there is a cottage industry of experts rationalizing the backlash against globalization. Dani Rodrik was one of the very few who warned about this backlash at least a decade in advance when the world was in thrall to the globalization fetish. A terrific guide to understanding this swinging pendulum, Straight Talk on Trade offers sensible suggestions on how not to love globalization if we are to preserve its many undeniable benefits."--Arvind Subramanian, chief economic adviser to the Government of India

"Straight Talk on Trade looks at the possibility that the world has proceeded too hastily with globalization and emphasized globalization of the wrong kind. Dani Rodrik contends that we have neglected notions of national sovereignty at our peril, and his knowledge, sources, methods, and arguments are all first-rate and battle-tested."--Tyler Cowen, author of The Complacent Class

"Not many economists are able to make astute observations about economics and politics based not only on professional knowledge but also on common sense. And only a few can speak at once to the academic economist, the economics student, applied economists, and intelligent readers outside the field. In Straight Talk on Trade, Dani Rodrik accomplishes this and more."--Ariel Rubinstein, Tel Aviv University and New York University