indgår i serie NORTH-HOLLAND SERIES IN APPLIED MATHEMATICS AND MECHANICS 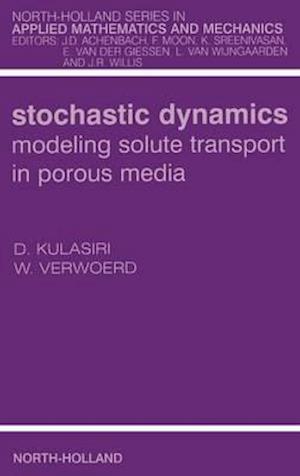 Most of the natural and biological phenomena such as solute transport in porous media exhibit variability which can not be modeled by using deterministic approaches. There is evidence in natural phenomena to suggest that some of the observations can not be explained by using the models which give deterministic solutions. Stochastic processes have a rich repository of objects which can be used to express the randomness inherent in the system and the evolution of the system over time. The attractiveness of the stochastic differential equations (SDE) and stochastic partial differential equations (SPDE) come from the fact that we can integrate the variability of the system along with the scientific knowledge pertaining to the system. One of the aims of this book is to explaim some useufl concepts in stochastic dynamics so that the scientists and engineers with a background in undergraduate differential calculus could appreciate the applicability and appropriateness of these developments in mathematics. The ideas are explained in an intuitive manner wherever possible with out compromising rigor.The solute transport problem in porous media saturated with water had been used as a natural setting to discuss the approaches based on stochastic dynamics. The work is also motivated by the need to have more sophisticated mathematical and computational frameworks to model the variability one encounters in natural and industrial systems. This book presents the ideas, models and computational solutions pertaining to a single problem: stochastic flow of contaminant transport in the saturated porous media such as that we find in underground aquifers. In attempting to solve this problem using stochastic concepts, different ideas and new concepts have been explored, and mathematical and computational frameworks have been developed in the process. Some of these concepts, arguments and mathematical and computational constructs are discussed in an intuititve manner in this book.