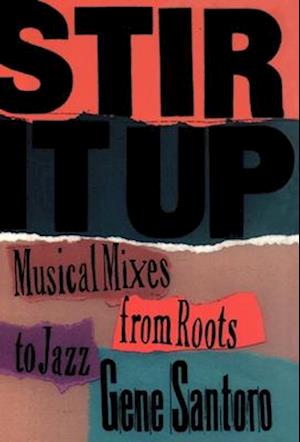 It's a cliche that the world is shrinking. As Gene Santoro sees it in his second collection of essays, music is one arena where that cliche takes on a real, but paradoxical, life: while music criss-crosses the globe with ever-greater speed, musicians seize what's useful, and expand their idioms more rapidly. More and more since the 1960s, musicians, both in America and abroad, have shown an uncanny but consistent ability to draw inspiration from quite unexpected sources. We think of Paul Simon in Graceland, blending Afropop rhythms and Everly Brothers harmonies into a remarkable new sound that captured imaginations worldwide. Or Jimi Hendrix, trying to wring from guitar the howling, Doppler-shifting winds he experienced as a paratrooper. Or Thelonius Monk, mingling Harlem stride piano,bebop, the impressionist harmonies of DeBussey, and a delight in "harmonic space" that eerily paralleled modern physics. From the startling experiments of such jazz giants as Charles Mingus, to the political bite of Bob Marley and Bruce Springsteen, we see musicians again and again taking musical traditionand making it new. The result is a profusion of new forms, media that are constantly being reinvented-in short, an art form capable of seemingly endless, and endlessly fascinating, permutations.Gene Santoro's Stir It Up is an ideal guide to this ever-changing soundscape. Santoro is the rare music critic equally at home writing about jazz (John Coltrane, Ornette Coleman, Tom Harrell), rock (Sting, Elvis Costello, P.J. Harvey), and the international scene (Jamaican, Brazilian, and African pop music). In Stir It Up, readers will find thoughtful but unpretentious discussions of such different musicians as David Byrne and Aretha Franklin, Gilberto Gil and Manu Dibango,Abbey Lincoln and Joe Lovano. And Santoro shows us not only the distinctive features of the diverse people who create so many dazzling sounds, but also the subtle and often surprising connections between them. With effortless authority and a rich sense of music history, he reveals, for instance, how Ornette Coleman wasinfluenced by a mystical group in Morocco-the Major Musicians of Joujouka-whom he discovered via Rolling Stone Brian Jones; how John Coltrane's unpredictable, extended sax solos influenced The Byrds, The Grateful Dead, and most significantly, Jimi Hendrix; and how Bob Marley's reggae combined Rastafarian chants with American pop, African call-and-response, and Black Nationalist politics into a potent mix that still shapes musicians from America to Africa, Europe to Asia. A former musician himself, Santoro is equally illuminating about both the technical aspects of the music and the personal development of the artists themselves. He offers us telling glimpses into their often turbulent lives: Ornette Coleman being kicked out of his high school band for improvising, Charles Mingus checking himself into Bellevue because he'd heard it was a good place to rest, the teenaged Jimi Hendrix practicing air-guitar with a broom at the foot of his bed, ArethaFranklin's Oedipal struggle with her larger-than-life preacher-father. Throughout the volume, Santoro's love and knowledge shine through, as he maps the rewarding terrain of pop music's varied traditions, its eclectic, cross-cultural borrowings, and its astonishing innovations. What results is a fascinating tour through twentieth-century popular music: lively, thought-provoking, leavened with humor and unexpected twists. Stir It Up is sure to challenge readers even as it entertains them.