- A History of American Broadcasting 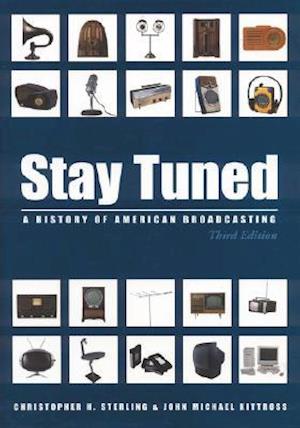 Since its initial publication in 1978, Stay Tuned has been recognized as the most comprehensive and useful single-volume history of American broadcasting and electronic media available. This third edition has been thoroughly revised and updated to bring the story of American broadcasting forward to the 21st century, affording readers not only the history of the most important and pervasive institution affecting our society, but also providing a contextual transition to the Internet and other modern media. The enthusiasm of authors Christopher H. Sterling and John Michael Kittross is apparent as they lead readers through the development of American electronic mass media, from the first electrical communication (telegraph and telephone); through radio and television; to the present convergence of media, business entities, programming, and delivery systems, including the Internet. Their presentation is engaging, as well as informative, promoting an interest in history and making the connections between the developments of yesterday and the industry of today. Features of this third edition include: *chronological and topical tables of contents; *new material reflecting modern research in the field; *a new chapter describing historical developments from 1988 through to the current day; *an expanded bibliography, including Web site and museum listings; *an updated and expanded glossary and chronology; and *extensive statistical data of the development of television and radio stations, networks, advertising, programming, audiences, and other aspects of broadcasting. Designed for use in undergraduate and graduate courses on the history of American mass media, broadcasting, and electronic media, Stay Tuned also fits well into mass communication survey courses as an introduction to electronic media topics. As a chronicle of American broadcasting, this volume is also engaging reading for anyone interested in old radio, early television, and the origins and development of American broadcasting.

Forfattere
Bibliotekernes beskrivelse The purpose of this work is to illustrate how the broadcasting industry has evolved to what it is today. This third edition includes: a chapter describing historical developments since 1998; updated and reorganized historical tables; and new tables on topics such as presidential elections.