Statehood and the State-Like in International Law 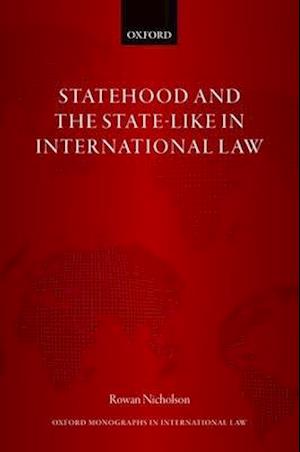 If the term were given its literal meaning, international law would be law between 'nations'. It is often described instead as being primarily between states. But this conceals the diversity of the nations or state-like entities that have personality in international law or that have had it historically. This book reconceptualizes statehood by positioning it within that wider family of state-like entities. In this monograph, Rowan Nicholson contends that states themselves have diverse legal underpinnings. Practice in cases such as Somalia and broader principles indicate that international law provides not one but two alternative methods of qualifying as a state. Subject to exceptions connected with territorial integrity and peremptory norms, an entity can be a state either on the ground that it meets criteria of effectiveness or on the ground that it is recognized by all other states. Nicholsonalso argues that states, in the strict legal sense in which the word is used today, have never been the only state-like entities with personality in international law. Others from the past and present include imperial China in the period when it was unreceptive to Western norms; precolonial Africanchiefdoms; 'states-in-context', an example of which may be Palestine, which have the attributes of statehood relative to states that recognize them; and entities such as Hong Kong.

Forfattere
Bibliotekernes beskrivelse This book sets out to answer the question of when a political entity becomes a state in international law, one of the foundational questions of the discipline.