- A terrible act in the heart of Westminster. A tough-talking cop faces his most challenging investigation... 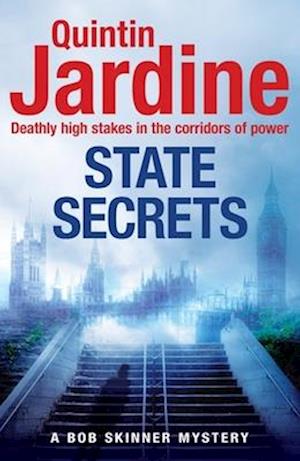 A shocking murder at the Palace of Westminster draws Edinburgh's toughest cop into a complex new case... Skinner is plunged into a web of politics and enemies in STATE SECRETS, the twenty-eighth mystery in Quintin Jardine's bestselling crime series. Not to be missed by readers of Ian Rankin and Peter May. Praise for Quintin Jardine's gritty novels: 'Well constructed, fast-paced...many an ingenious twist and turn' ObserverFormer Chief Constable Bob Skinner is long out of the police force but trouble has a habit of following him around. So it is that he finds himself in the Palace of Westminster as a shocking act befalls the nation. Hours before the Prime Minister is due to make a controversial statement, she is discovered in her office with a letter opener driven through her skull. Is the act political? Personal? Or even one of terror?Skinner is swiftly enlisted by the Security Service to lead the investigation. Reunited with Met Police Commander Neil McIlhenney, he has forty-eight hours to crack the case - before the press unleash their wrath.There are many in the tangled web of government with cause to act. But the outcome will be one that not even Skinner himself could predict...

Forfattere
Bibliotekernes beskrivelse Edinburgh's toughest cop is drawn into a gripping new case at the Palace of Westminster, a tangled web of state secrets and enemies. The twenty-eighth mystery in Quintin Jardine's ever-popular Bob Skinner series.