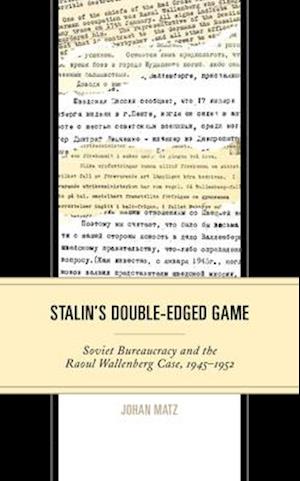 Raoul Wallenberg, the courageous Swedish businessman turned diplomat and savior of thousands of Jews in Budapest, Hungary, in 1944, was arrested in January 1945 by the Soviet military counterintelligence, incarcerated in the Lubianka prison in Moscow and later murdered for reasons that remain obscure to this day. Drawing on recently declassified Soviet encrypted cables and a wide array of Soviet and Swedish archival sources, Stalin's Double-Edged Game: Soviet Bureaucracy and the Raoul Wallenberg Case, 1945-1952 offers the first comprehensive analysis into the inner workings and inter-departmental communication of the Soviet foreign and state security ministries in relation to his case. The way in which these branches of the Soviet apparatus reacted to Swedish diplomatic approaches on account of Wallenberg in the years 1945-1948 indicate that Stalin never had any other plan with Wallenberg than to have him murdered and to make the Swedes believe that he died in Hungary, shortly after the fall of Budapest. The book thereby challenges prevailing hypotheses into the Soviet leader's motives as regards Wallenberg.