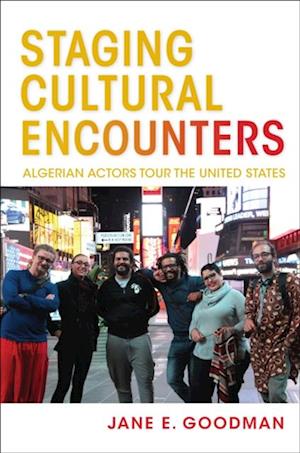 An anthropologist recounts an Algerian theater troupe's 2016 US tour, detailing the highs and lows of the cross-cultural exchange.Staging Cultural Encounters tells stories about performances of cultural encounter and cultural exchange during the US tour of the Algerian theater troupe Istijmam Culturelle in 2016. Jane E. Goodman follows the Algerian theater troupe as they prepare for and then tour the United States under the auspices of the Center Stage program, sponsored by the US State Department to promote cross-cultural dialogue and understanding.The title of the play Istijmam produced was translated as 'Apples,' written by Abdelkader Alloula, a renowned Algerian playwright, director, and actor who was assassinated in 1994. Goodman take readers on tour with the actors as they move from the Kennedy Center in Washington, D.C. to the large state universities of New Hampshire and Indiana, and from a tiny community theater in small-town New England to the stage of the avant-garde La MaMa Theater in New York City.Staging Cultural Encounters takes up conundrums of cross-cultural encounter, challenges in translation, and audience reception, offering a frank account of the encounters with American audiences and the successes and disappointments of the experience of exchange.'This is a ground-breaking and beautifully written work in the anthropology of performance as well as an intervention in experimental anthropology, wherein theater play is both ethnographic subject and method. The book is accompanied by a detailed website of audio-visual examples, making this a hyper-text, a multi-modal way of knowing. It is a tour de force.' -Deborah Kapchan, author of Theorizing Sound Writing'In this engrossing ethnography [Goodman] brings to life the excitements, hopes and disappointments of their staged cultural encounter. We are shown in fascinating detail what lies behind and before the tour: the actors' intense disciplined dedication to avant garde theatre practices, the political and economic constraints of contemporary Algeria, the labour of translation, the performance traditions of the Algerian market place. . . . Subtle, searching and empathetic, with touches of wry humor, Goodman's study will become an instant classic in anthropology, theatre and performance studies.' -Karin Barber, London School of Economics, author of A History of African Popular Culture