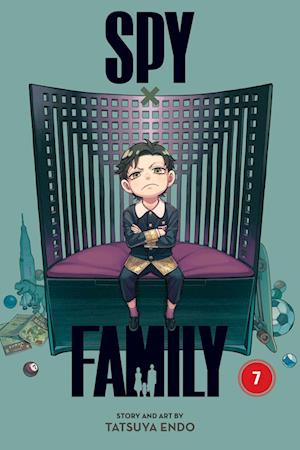 "Spy x Family, Vol. 7" by Tatsuya Endo is the 7th volume of the deeply entertaining and action-heavy manga series that follows the happenings of Twilight, the master spy, and his fake family.

It certainly wasn't planned, but it can be incredibly useful when you discover that your fake daughter is a telepath, and your fake wife is a secret assassin. This is the case for Twilight, or Loid Forger as he is called on this mission, where he has to pose as family man and father. Together with the assassin Yor, the young mind reader Anya and the huge dog Bond, Twilight has found himself an unusual family to help him with Operation Strix.

In "Spy x Family, Vol. 7" by Tatsuya Endo it is finally time for Twilight to face his target. Donovan Desmond plans to spend time with Damien, his son and Anya's classmate, and Twilight is going to cut in on the target's precious bit of family time. Hopefully Loid will hit it off with Donovan without blowing his cover.

Forfatter
Forlagets beskrivelse An action-packed comedy about a fake family that includes a spy, an assassin and a telepath! Master spy Twilight is unparalleled when it comes to going undercover on dangerous missions for the betterment of the world. But when he receives the ultimate assignment--to get married and have a kid--he may finally be in over his head! As Donovan Desmond is about to share a rare family moment with his son Damian, Twilight cuts in to meet his target face-to-face for the first time. Can Twilight find some way to endear himself to the inscrutable Donovan?