- The Hunt for Nazi Criminals 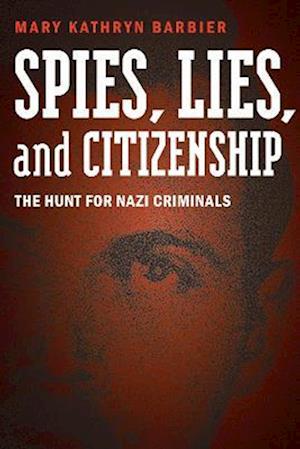 In the 1970s news broke that former Nazis had escaped prosecution and were living the good life in the United States. Outrage swept the nation, and the public outcry put extreme pressure on the U.S. government to investigate these claims and to deport offenders. The subsequent creation of the Office of Special Investigations marked the official beginning of Nazi-hunting in the United States, but it was far from the end.Thirty years later, in November 2010, the New York Times obtained a copy of a confidential 2006 report by the Justice Department titled “The Office of Special Investigations: Striving for Accountability in the Aftermath of the Holocaust.” The six-hundred-page report held shocking secrets regarding the government’s botched attempts to hunt down and prosecute Nazis in the United States and its willingness to harbor and even employ these criminals after World War II.Drawing from this report as well as other sources, Spies, Lies, and Citizenship exposes scandalous new information about infamous Nazi perpetrators, including Andrija Artukovic, Klaus Barbie, and Arthur Rudolph, who were sheltered and protected in the United States and beyond, and the ongoing attempts to bring the remaining Nazis, such as Josef Mengele, to justice.