- an epic young adult fantasy set in an Arabian-inspired land 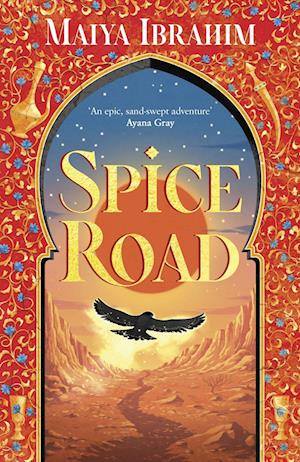 Whoever controls the Spice . . . controls the Kingdom itself.The first book in an epic fantasy series for fans of Sabaa Tahir, Hafsah Faizal and Elizabeth Lim, set in an Arabian-inspired land. Raised to protect her nation from the monsters lurking in the sands, seventeen-year-old Imani must fight to find her brother whose betrayal is now their greatest threat.In the hidden desert city of Qalia, secret spice magic awakens the affinities of those who drink the misra tea. With her affinity for iron, seventeen-year-old Imani can wield a dagger like no other - and for that she has gained a reputation as the next greatest Shield, battling djinn, ghouls, and the other monsters spreading across the sands.But ever since her brother was discovered stealing their nation's coveted spice - a tell-tale sign of magical obsession - and disappeared into the deadly Forbidden Wastes, Imani's reputation has been in tatters. Despite Atheer's betrayal, there isn't a day that goes by that she doesn't grieve him.Then Imani discovers signs her brother may be alive, and spreading their nation's magic to outsiders. Desperate to find him - and to protect him - she joins the mission sent to hunt him down. Accompanied by Taha, a powerful beastseer, who enthrals and enrages her in equal measure, Imani soon discovers that many secrets lie beyond the Forbidden Wastes - and in her own heart.Caught between her duty to her nation, and her love for her brother, Imani must decide where her loyalties lie . . . before it is too late.'An epic, sand-swept adventure' Ayana Gray, New York Times bestselling author of Beasts of Prey'An enchanting world of tea magic and desert monsters and a thrilling quest helmed by a girl whose wit is sharper than her blades' Amelie Wen Zhao, author of Blood Heir