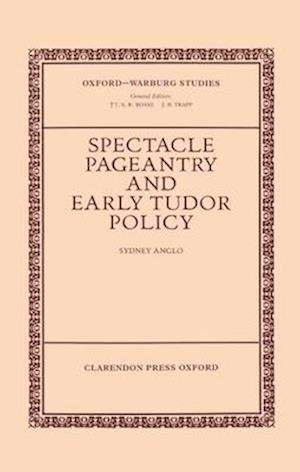 Sydney Anglo discusses every English royal entry, festival, disguising, masque, and tournament from the accession of Henry VII to the coronation celebrations of Elizabeth I. Based principally on primary sources, his study is analytical rather than descriptive. In 1969, when this book first appeared, the serious study of Renaissance court festivals and civic pageantry was in its infancy and - although the subject has since burgeoned - the volume of publicationsrelevant to the early Tudors was modest and largely confined to matters of detail. In this new edition Professor Anglo discusses material published since 1969 in a preface where, as far as possible, the material is arranged according to the chronological and thematic order of the book. The originalpagination and notes which have regularly been cited by scholars has thereby been retained. A bibliography of works cited in the text has been added to facilitate the work of a new generation of students.

Forfattere
Bibliotekernes beskrivelse The study of court festivals, spectacle, and civic pageantry in Renaissance Europe has developed into a major academic industry, so that the market for works on these themes extends beyond the boundaries of conventional scholarly disciplines. Discussing material published since 1969, this book includes a bibliographical and critical preface.