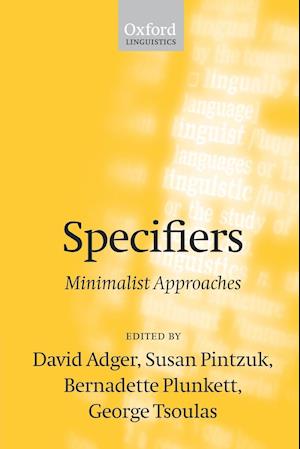 By the late 1980s, Government and Binding Theory - which was central to almost all research in generative grammar - threatened to become as large and as intricate as the language it described. To counter this, Noam Chomsky introduced a minimalist program with the aim of making explanations of language as simple and general as possible. It has since gained widespread (if not quite universal) acceptance, to the extent that the most recent first-year textbook in syntax(Radford, CUP, 1997) is based on it. One of the areas subjected to this minimalist scrutiny has been phrase structure, the fundamental basis of grammar. This book focuses on the most controversial area of phrase structure, the notion of specifier - a notion encompassing the traditional categories of subjects, possessors, determiners, auxiliaries, and adjuncts. It examines what place the notion has in the new theory and how the projection of specifiers is to be eliminated or extended. The contributors (prominent American, British, and European scholars) draw on empirical, theoretical research in cross-linguistic phenomena and first and second language acquisition. The substantial introductory chapter provides an up-to-date account of minimalist syntactic theory and a critical evaluation of the notion of specifier within it.