Space Science: STEM in Space: Science for Surviving in Space 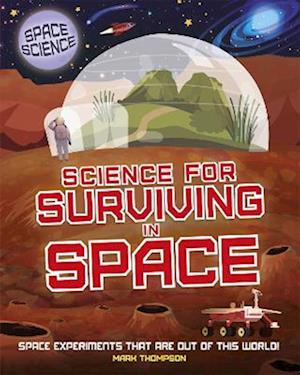 Imagine living on an alien planet!But to really do that you'll need to apply a fair bit of science.This book has twelve scientific investigations to help you understand how force fields help us, why taking a shower is space is tricky and how tiny specs of space dust can be deadly. Discover why insulation is important and what would happen if you went out into space without a spacesuit - and lots, lots more!This book is part of the Space Science series, which covers key areas of the science curriculum, such as forces, materials and matter, light, rocks, chemical reactions, recycling and waste, magnets, solar power, gravity, distance, maps and constellations.Space Science is the ultimate series for the astronomers and astronauts of the future. It delves into loads of intriguing 'how', 'what', and 'why' facts about the night sky. The step-by-step instructions are easy to follow and use readily available materials that won't break the bank! Authored by Mark Thompson - a brilliant astronomer and television and radio presenter - who brings a fresh approach to the exploration and understanding of the Solar System ... and beyond!For readers aged 9+Titles in this series:Science for Exploring SpaceScience for Looking Into SpaceScience for Rocketing Into SpaceScience for Surviving in Space