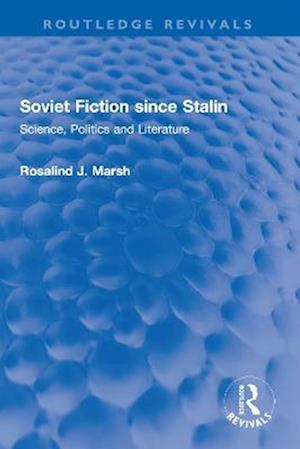 First published in 1986, Soviet Fiction since Stalin presents a comprehensive overview of the literature of the post Stalin period in the Soviet Union. The rapid advances in science and technology in these years are reflected in the themes of many of the major novelists - Pasternak, Solzhenitsyn, Sinyavsky, Daniel and Grossman- and scientific subjects frequently offer a vehicle for the exploration of the wider socio-political, moral, and philosophical ideas. As the period advances, however, literature becomes the first medium in which to express mistrust of scientific advance, and hence, indirectly, of Soviet policy as a whole. Rosalind J. Marsh uses a broad definition of 'science' which enables her to cover topics ranging from de-Stalinization, nationalism, and anti- Semitism in science, to Lysenko and scientific charlatanism, the Soviet rejection of relativity theory and quantum mechanics, the atom bomb, and also such general problems as secrecy, careerism, and bureaucracy. The bulk of the book concentrates on the Khrushchev years but there is also plentiful discussion of more recent writing such as that of Zinoviev and Voinovich. This book will be of interest to students and researchers of Soviet literature, Russian Literature and literature in general.