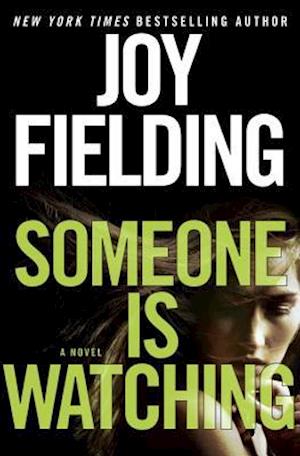 A pulse-pounding thriller perfect for fans of Lisa Gardner and Mary Higgins Clark with a sly nod toward Alfred Hitchcock's classic film Rear Window, Someone Is Watching boasts the extraordinary edge-of-your-seat storytelling of bestselling author Joy Fielding at the height of her powers.

As a special investigator for a hotshot Miami law firm, Bailey Carpenter is smart, savvy, and fearless. When she's assigned to spy on a deadbeat dad in the middle of the night, Bailey thinks nothing of the potential dangers, only that she needs to gather evidence. Then she is blindsided--attacked and nearly killed. Now the firm grip Bailey once had on her life is shaken. Her nightmares merge into her waking hours and she's unable to venture beyond her front door without panicking. A veritable prisoner in her own home, Bailey is uncertain whom she can trust. But old habits die hard, and soon Bailey finds a new use for her idle binoculars: casually observing from her window neighboring buildings and other people's lives. This seemingly harmless diversion becomes a guilty pleasure when Bailey fixates on the handsome guy across the street--until she realizes that he is also watching her. Suddenly she must confront the terrifying possibility that he may be the man who shattered her life. Though crippled by fear, Bailey knows she can't ignore her suspicions and risk leaving a predator at large. With the police making no headway in solving her case, she's determined to overcome her terror and reclaim the power she lost by unmasking her attacker and taking him down herself. But it's a harrowing battle that threatens to wreck Bailey's credibility, compromise an investigation, and maybe even claim her sanity. Praise for Someone Is Watching

"Someone Is Watching gripped me from the first to the very last page. Bailey Carpenter is a heroine who's both victim and warrior woman, a fascinating sleuth who will linger with you long after you've finished this thrilling read."--Tess Gerritsen

"Joy Fielding has long been a go-to author for me. She never fails to deliver an edge-of-your-seat read, and with her patented blend of complex characters and escalating suspense she is in top form here. I highly recommend Someone Is Watching."--Karen Robards "Joy Fielding pens a spiraling tale of paranoia and suspense, as sultry as a Miami night. Readers will find a heroine to root for, scold, and ultimately adore in Bailey Carpenter. Though comparisons to Rear Window will inevitably arise, Fielding has created something even more remarkable: a modern-day Gaslight in which both cat and mouse are real, flawed, and eminently relatable."--Jenny Milchman

"Someone Is Watching is a gripping, fast-paced psychological thriller reminiscent of Rear Window and the works of Lisa Gardner. . . . Not geared to the faint of heart, Fielding's story of one woman's search for justice, understanding, and internal peace is nothing short of arresting."--Booklist (starred review) "This engrossing standalone from bestseller Fielding makes you care about Bailey Carpenter. . . . The characters pulsate with life, and there are a few shocks in store--for Bailey and the reader--before the denouement. And the presence of Jade, Claire's outspoken teen daughter, blows everyone else off the page."--Publishers Weekly (starred review)

"A page-turning ride with a likable protagonist."--Kirkus Reviews