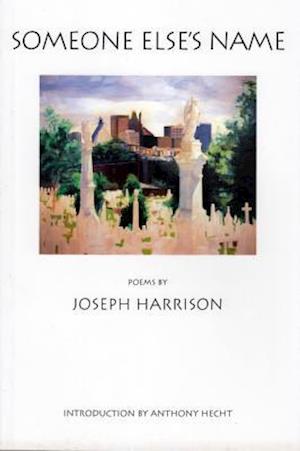 Poetry. "SOMEONE ELSE'S NAME is a first book full of stunning performances, each one infused with wit, feeling, and humanity, and each one delighting in the full use of the medium and its devices. It's a happy thing to witness the emergence of such a talent."--Richard Wilbur

"In this brilliant first book the deepest of feeling and the most profound thought rise up in response to a glittering surface of wit, which is never an end in itself. Throughout these poems, deep poetic learning and passionate responses to immediate experience interanimate one another. Mr. Harrison's imagination is unflagging, and can keep going through 'As If, ' a splendid revisionary sonnet sequence, or the remarkable 'Mobile Bay Jubilee.' His is an outstanding talent, and he does not betray it by anything but the most meticulous of workmanship."--John Hollander

"SOMEONE ELSE'S NAME is a book of brilliant wit, erudition, and technical ingenuity, and, played for the highest stakes, is no less than a quest for personal and artistic identity through poem after poem in which no reader can fail 'Underneath their curlicue and flair / to] hear the real pathos there.' It is a stunning book."--Greg Williamson

"Seven years ago the poet Greg Williamson sent me a slim manuscript by his close friend and Johns Hopkins colleague, Joe Harrison. I was very impressed by what I read, but it just didn't prepare me for the impact of this stunning and ample first collection. Harrison has all of Williamson's strengths. He is a punctilious metrist, a born rhymer, an inventor of graceful, intricate stanzas. He's also ingeniously contemporary, as in the two poems for Dante the robot, which was lowered into the caldera of Mount Erebus. In flawless terza rima, of course. Or the little ode 'Air Larry, ' about the nut case who rode his helium-balloon-powered lawn chair into the jet space 16,000 feet above L.A. Yet everything he writes is invested with a deep learning, worn lightly, borne of wide reading in the canon. He is a far more mournful poet than his younger friend, and his concerns are more elemental, less cerebral. If I have any reservation about either of them, it is that they are too much concerned with the themes of iteration, with writing poetry on poetry. But that's the reaction of a farmer to most academics. In his fifth decade, Harrison is a fully formed, dazzlingly fine poet; and every lover of our ancient art will be grateful to have this book on his shelf."--Timothy Murphy

"Sad and funny by turns and often simultaneously, the quests, meditations, and laments in this rich collection are unfailingly sane--no, more than sane, wise. Furthermore, Harrison's every poem is lullingly melodic, though each sings a different tune. This exceptional debut is a rare delight."--Rachel Hadas

"Harrison's most serious poems, with their cold, depopulated locales, pick up on the grimmest bits of Robert Frost: in 'The End of Dewitt Finley' a snowbound salesman starves to death in his truck. After such harsh forests of symbols, it's a joy to find 'Mobile Bay Jubilee, ' an expansive homage in giant acrobatic stanzas (borrowed from Edmund Spenser) to an annual tidal event 'when the fish come forth from the sea / And the sweet flesh of the deep can be had for a song.' Scholars might call it a piscatory ode; Alabamians might call it a feast."--Stephen Burt

"Joseph Harrison's is a distinctive voice which is never less than highly entertaining; this is a mind of great quickness and wit, served by a sheer skill that is itself a pleasure to encounter."--Glyn Pursglove

"Joseph Harrison's first collection, SOMEONE ELSE'S NAME, carries a glowing blurb from Richard Wilbur (complimentary almost to the point of giddiness), and a lengthy, glorifying introduction by Anthony Hecht which, taken together, may be the closest thing to a money-back guarantee a publisher can offer...The book...is...a Major Accomplishment ...And, more importantly, it is enormous fun."--Jon Mooallem