SOMA 2014. Proceedings of the 18th Symposium on Mediterranean Archaeology 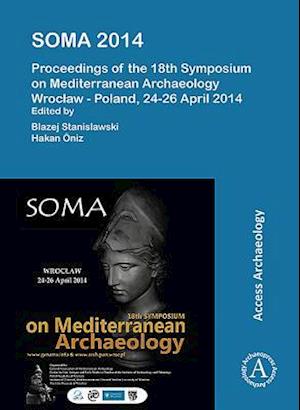 The 18th annual meeting of the Symposium on Mediterranean Archaeology (SOMA) was held in Wroclaw-Poland, 24th to 26th April 2014. Since prehistoric times the Mediterranean has acted as a stage for intense interactions between groups inhabiting regions that are now studied mainly within various sub-fields of ancient studies. In recent years, however, the development of research techniques and analytical models of archaeological evidence have identified similar historical paths that are similar, if not, in some cases, common to these disparate areas of the ancient world from West (Iberian peninsula) to East (Anatolia and Levant), from North (Europe, Black Sea Coast) to South (Maghreb and Egypt). The 18th SOMA provided a forum for presentations related to the above-mentioned topics, as well as general themes such as the role of the sea, trade, colonization, even piracy, using archaeological data collected within contexts associated with the Mediterranean Basin and the area referred to as the Ancient Near East, ranging chronologically from the Prehistoric to Medieval periods. This current volume contains 22 papers selected from the 90 presented.

Forfattere
Bibliotekernes beskrivelse Presents 22 papers from the 18th annual meeting of the Symposium on Mediterranean Archaeology (SOMA), held in Wroclaw-Poland, 24th to 26th April 2014. Illustrated throughout with 35 plates in colour