Small Musical Worlds in the Mediterranean 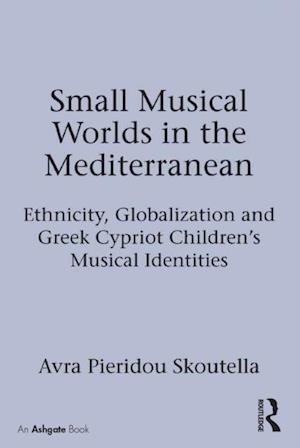 Small Musical Worlds in the Mediterranean is a pioneering book-length study of the complex topics of identity, ethnicity and global processes in children's musical lives in the Republic of Cyprus - a Mediterranean country during its post-colonial era. What is it about this country's musical enculturation that made musical identity such a potent element in Greek Cypriot children's worlds? How is history, tradition, modernity, ethnic fluidity, syncretism and diversification in the Mediterranean negotiated in the construction of musical 'self' and 'other' in children's daily lives? This book, through a journey of 'fieldwork at home', discusses how children select, reject, reproduce and transform meanings and create new ones at the micro-level of their lives through which individuals and groups define themselves and others. Towards this exploration, musical identity in childhood is discussed in terms of cultural production and reproduction, human expression, inter-relating and learning. Ethnographic vignettes of children's musical practices and direct words add depth and humour to the flow of the book. This study is a synthesis of ethnomusicology, musical anthropology, education and folklore in which the author effectively weaves together theories of musical enculturation and identity, sociocultural learning and human agency. The book will be invaluable to scholars interested in musical enculturation, musical identities, children's contextual musical practices, ethnicity, globalization studies, music education and Mediterranean studies.